Dark Fashion: The Origin, Symbolism, and How You Can Do It

Dark fashion is an old style of clothing that is emerging once again in the modern era. It is a seldomly bland type of fashion that aims to mark uniformity, elegance, danger, or modesty. It is an exciting type of clothing as it can turn more expressive the more you add details into it.

Actually, this style suggests sophistication and luxury unlike any other. It's in the art of defining shadows through smoky makeup and lipstick that makes it mysterious and appealing in its way. Since fashion is correlated with conformity, this dark clothing has immense quality in our lives.

Dark fashion illustrates a timeless style that will never change. However, it was initially used for most men with dark-robed figures. It was rarely seen with women. It was called the Dark Ages for fashion. People back then knew the value of dark fashion more than anyone. That's because the price of dark dyes and clothes before can only be afforded by wealthy people.

It is seen in almost every historical figure. There is Spain's Ferdinand II, who wore the black silk and dull dark helmet. There is Cardinal Mercurio Gattinara, who wore the modest wool soutane in the Holy Roman Empire. The Queen of Scots, Mary, Her Majesty Queen Elizabeth I, Richard III, Queen Victoria, and even Catherine de' Medici.

From the middle of the 1800s, Theory of Leisure Class happened - making people more open with intellectual discovery. Both men and women started to wear dark fashion freely. It was when the colorful style became dark, poetic, and artful. Until now, we are still unconsciously using dark fashion. 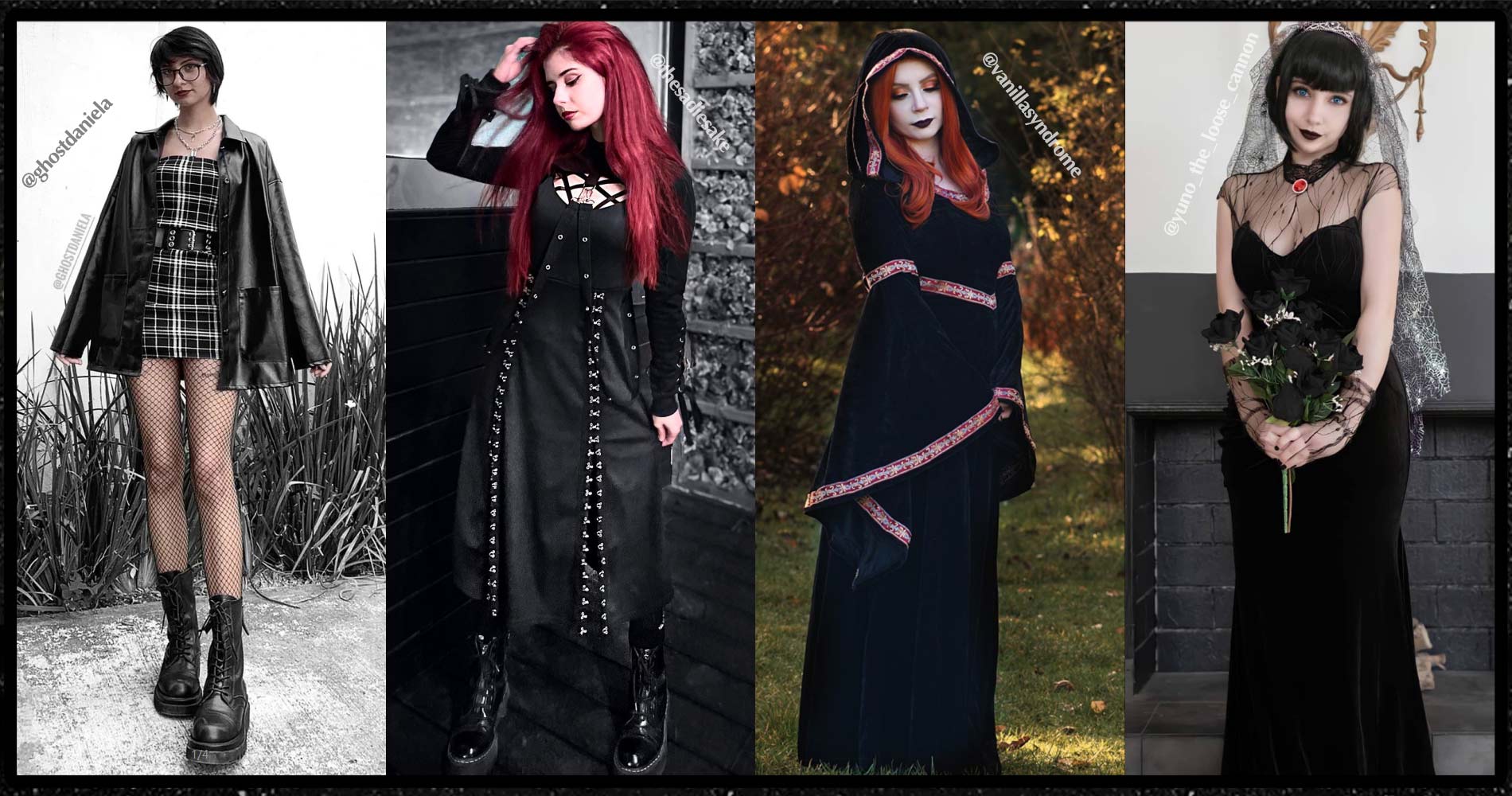 The Symbolism of Black Clothing

Black clothing may vary in meaning depending on a person's cultural heritage. It is purely negative and mourning for some, but some may give them powerful symbolism. Even you, yourself, gave a different way of perceiving the color black in fashion, so we'll interpret the black clothing in the most general way possible.

For many fashion brands, black is indispensable. It is related to a person's confidence, intelligence, and attractiveness. Though the color inevitably has a negative interpretation ringing around it, people are still using it either way. It can be used well in business because it symbolizes professionalism and responsibility.

A Brief History of Black in Fashion

Black fashion started in the 14th century when the European middle classes adopted wearing expensive black clothes. It has been originally known as a fashion for those with mobility, law, and more. Through the Protestant Reformation, the symbolization of dark fashion has changed.

Black has become the sober color of the first Pilgrim settlers living in America. It has been a color of Calvinism, in contrast to lavish splendors regarding religious catholicism. Then, in the late 1600, the US and Europe corresponded color with witchcraft and pilgrims.

During the 19th century, the color black has been renowned as the color of romantic heroes. From Keats, Shelley, and Byron - it was fastly adopted as a color of choice because of its melancholic vibe. Then now, in the present, color is re-emerging as a dark fashion that illustrates authority, independence, and uniqueness among any other. 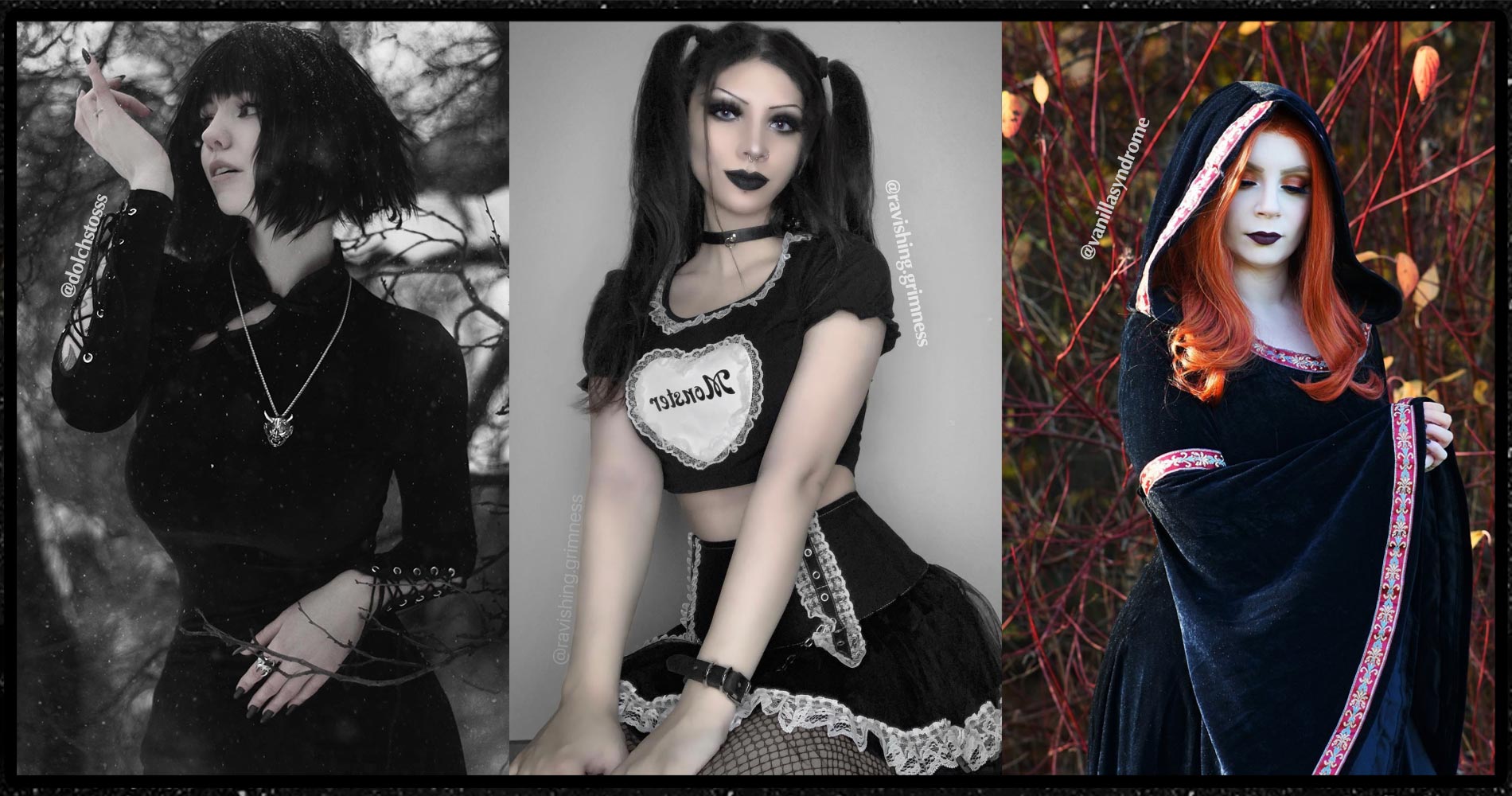 Cybergoth first emerged during the late 1990s and has remained relatively constant since then. Supporters of electronic goth songs, including such futurepop, which VNV Nation's Ronan Harris popularized, are among those who are drawn to the subculture. It is a trance kind of music with dark vocals and lyrics.

Health Goth had been a 2014 cyberpunk fad. Denim Full-Face Masks by Kanye West. Mainstream brands like H&M and Alexander Wang have adopted it. It looks like bohemians in sportswear. Some say it's more about a space-age aesthetic expression than a healthy lifestyle. The evidence is that it is unsuitable for sports.

Modern, monotone, all in all, black and white premium goth streetwear. Sharp lines, meshes, and translucent materials define the health goth style. Light weaponry is available as an accessory. Transparent oversized shirts with a Nike top underneath are great examples for a health goth look. Add white shoes and black jeans to the look. Finish with dark braids and cosmetics.

They had wavy hair and long side-swept bangs that typically covered one eye, usually colored black and natural blonde or other artificial colors. Today, if you want to look more "serious," you still can have asymmetrical, punky hair. If you don't want to use neon colors, go for pastel shades. Dress up your black band t-shirt with shorts, a torn tight, as well as some Vans.

It looks a lot like soft grunge, but pastel goth came into existence in the 2010s. It's predicated on the Grunge style. The dark outfits with reversed crosses, spooky cute quotes written in magenta or lilac, and other symbols from the dark arts. The most important thing seems to be the pastel hair, which can be peachy pink, lavender, bluish mint, pale, blonde, or balayage.

Some other crucial components of the look are accessories, which are also necessary to look good. You can add bows and hair accessories, eye sockets, flower crowns, skeletons, antlers, and bats to the list. You can also add craniums, necklaces, and heart garters. It's a good idea to add some creepers to your outfit or some mauve.

In 2014, Rihanna got the credit for the ghetto fashion, which is comparable to health goth, though it's a little more flashy. You've presumably seen her in numerous mildly goth clothes, but as always, she's not scared to try and insert her personalized feel. However, DJ Venus X is the person who came up with this look.

A typical look includes long gothic outfits, dark lipstick, and black makeup. That is what most people look like. Leather jackets are often taken to wear. Other goth things to think about are creepers, chokers, dog collars, eyewear, and more. The urban part can have a lot of ghetto bands and jewelry, like big dangle earrings.

Nu Goth is the most up-to-date, simplistic, and casual style of goth clothing and look. It mixes neoclassicism and hipster, goth, and Japanese style. Thus, many people don't know the difference between pastel grunge, nu goth, and pastel goth. Dark and mysterious, with witchy hats, sharp lines, and gloomy makeup. Long gowns, tees with Illuminati prints, skateboarder skirts, as well as crop tops are some of the things you should look for when you go shopping.

You can put some details to your outfit using occult jewelry, striped stockings with crosses, and thigh-high socks. In addition, there are skull prints and upside-down crosses. There are aliens and celestial bodies. Besides, there are also tarot cards, clairvoyants, and Ouija board-themed outfits. With some chunky heeled or Lita shoes, you can make this style look even more stylish. 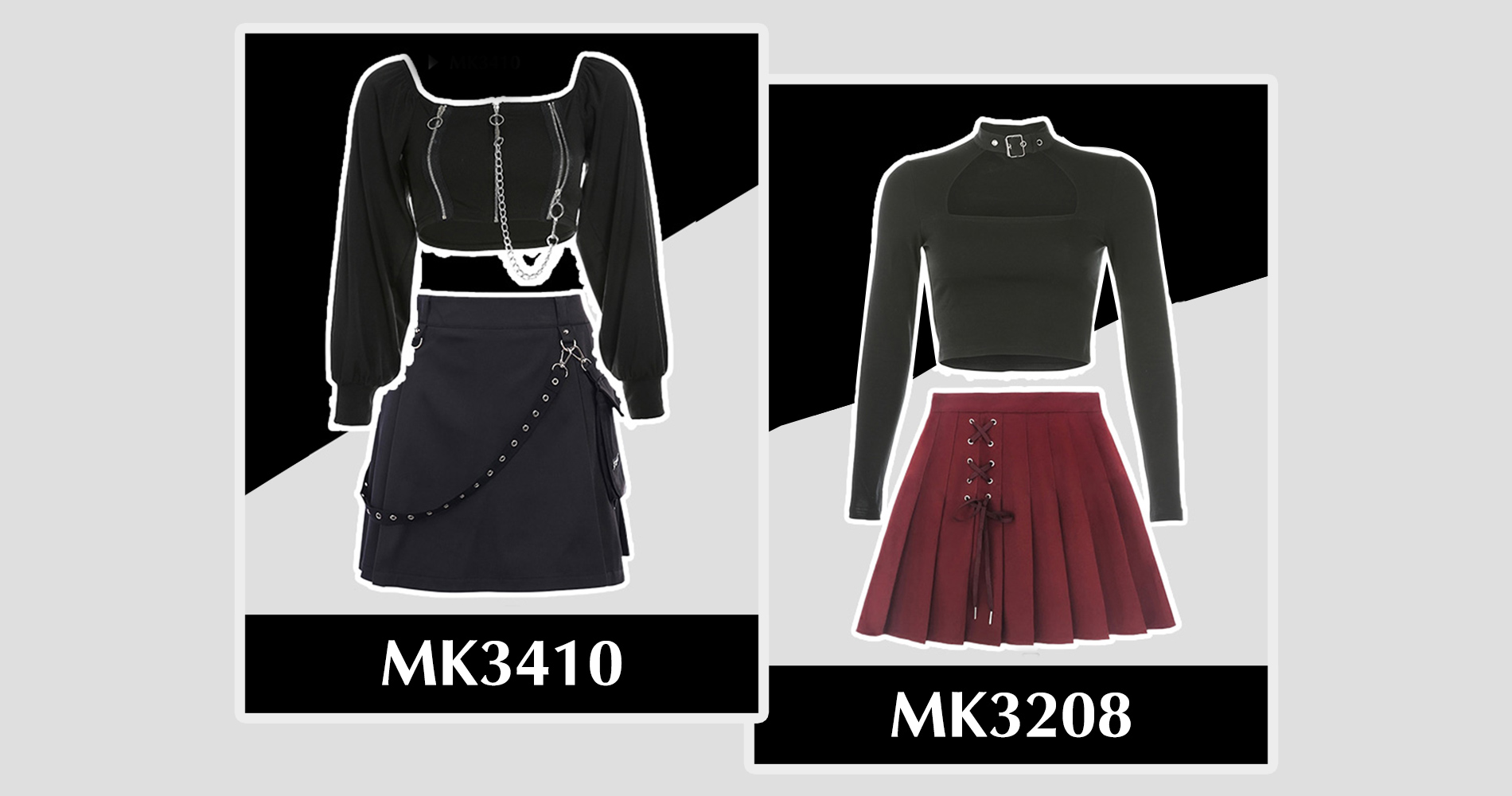 If you want to be in dark fashion, you need to be obsessed with black clothing. After all, black has always been the staple of dark fashion, so you might as well own a wardrobe with all blacks. T-shirts are the primary way to get started into dark fashion, then you can later move with pants, skirts, tops, and socks.

Now, if you don't like the idea of owning a black wardrobe, then it will be hard for you to be in the dark fashion. Though, it doesn't mean that you need to wear color black all the time. It is acceptable to wear other colors like red, blue, violet or rainbow as you'd like.

Everyone who's in dark fashion knows that occult patterns symbolize dark fashion. Hence, you might like to keep an eye on graphic and patterned printed clothes. It should feature some objects like moons, crosses, stars and pentagrams.

You can wear a casual dress with a moon phase print as long as you wear it with black creepers and socks. Finalize your outfit by wearing dark and complimenting makeup. 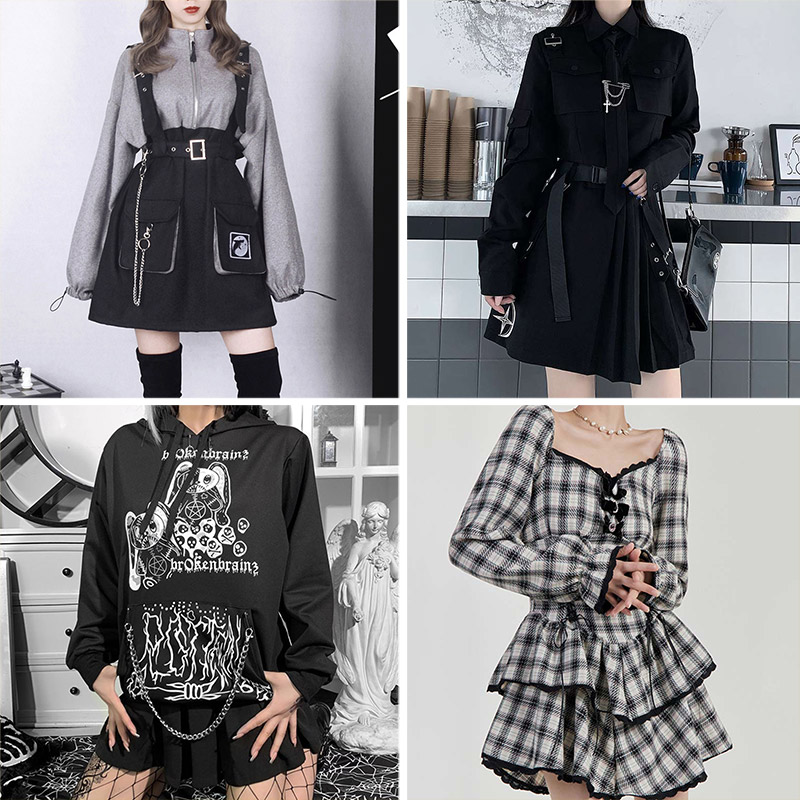 If you're losing ideas in picking out your accessories, you can try these out:

You may have one of these already because it's a normal element for dark fashionistas. You can try dark-colored Hats like beanies, bowlers, and even wide-brimmed hats. It will go well in your personal fashion style.

Pentagram is a must-own type of style for those in love with dark fashion. Because why not? You can partner it with many great outfits. It also takes inspiration from the iconography and cultures from Ankhs, Christian, Celtic, Pagan, Asian and Egyptian.

Chokers are pretty popular and common for everyone in a dark fashion. It looks great and stylish even with a simple t-shirt and other tops. Also, you can get plain chokers or others with designs of stars, pendants, and skulls.

Black tights and socks are used widely for those who want a dark fashion. It can add a stylish vibe to your outfit while defining your figure.

Fishnets are one of the best accessories you can buy for dark fashion because they complete your look. You can wear fishnets under your pants and shirts to emphasize the fishnet. That is definitely a must-have. 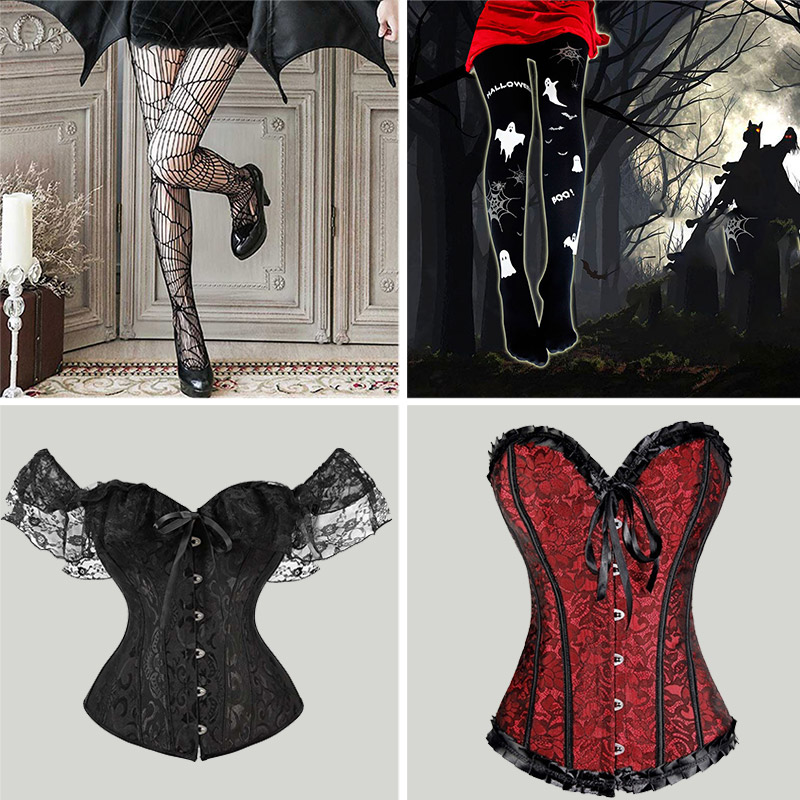 Boots are a total game-changer. It can make you look petite and taller, depending on how you want it to work. It will look best, especially in the cold weather, and it's pretty comfortable too. 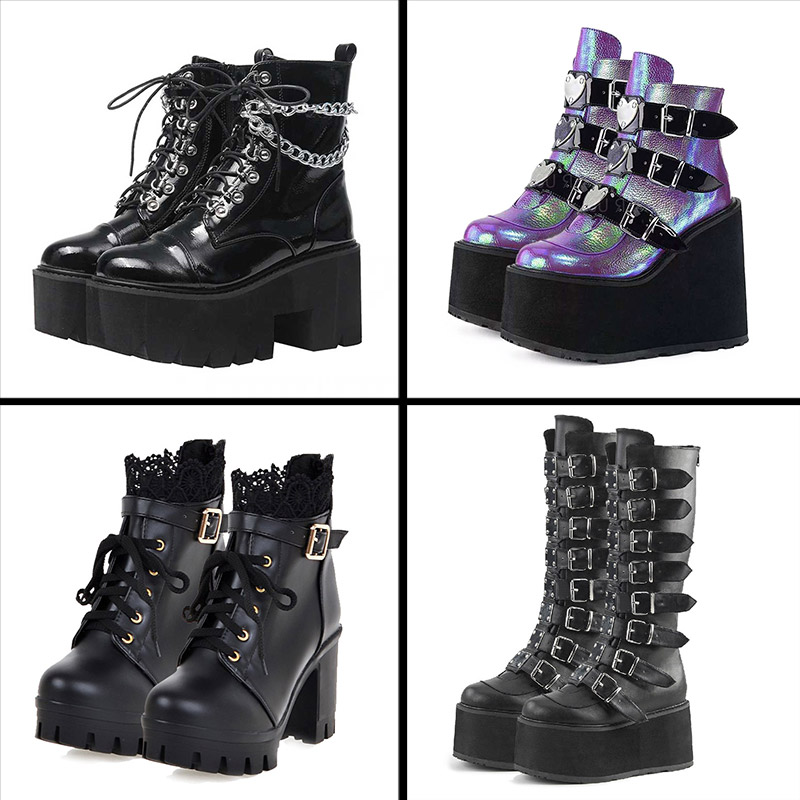 Hairs are the crowning beauty of a person, so coloring them aligned with your style is a great idea for dark fashion. You see, most people with this style like to dye their hair in shades of blue, red, purple, green, pink, and gray.

The natural hair color work very well in dark fashion because it's naturally dark - from black to light brown, you don't have to change the color if you like how it currently looks.

Dark Fashion symbolizes an extra dramatic, and expressive style, so dark makeup comes hand in hand with it. You can apply your makeup in the shade of red, blue, violet, and even black to highlight your lips and eyeshadow.

Being confident is the first and last step in becoming a real dark fashionista. What's the point of doing all the given tips if you are not certain and confident in your look? The most you can do for yourself in this journey is to learn how to express yourself through looks. Dark Fashion only helps to unleash the ideas that you have on your mind. Be confident.

Why Is Black Clothing So Popular?

As you may have known by now, black clothing has dominated the fashion industry ever since the 1400s. It has gone through many transitions, which only add value over time. Black clothing is perhaps trendy not only because of its stylish appearance but also because of its people.

There are many people who find comfort by wearing black clothing. It is natural for humans to be attracted to the things that make them feel safe and confident. For it to be this popular, many people find black clothing as a cozy and likable style.

Dark Fashion: Are They Ruining Our Subculture?

From the elites up to the celebrities, dark fashion itself is a subculture that passed. While it may contradict other beliefs and cultures of those in the opposite fashion, it doesn't mean that dark fashion should be disregarded.

First of all, dark fashion - just like other clothing styles - was chosen by the people themselves. It is the people who make culture and changes in life. Hence, dark fashion is not in the littlest way possible to ruin the subculture.

Now that you know the dark fashion thoroughly from its history and origination, it's natural to feel a little closer towards it. Dark Fashion is, after all, one of the arts created by those who are into the darker shades.

You can feel free to use the advice and tips to start or expand your dark fashion. But most importantly, after reading all of this, you should be more confident in your style.