What is Harajuku Fashion? How to Dress Harajuku Style?

You may have seen people in the streets of Japan wearing outlandish clothes and wonder, 'is this Harajuku fashion?'

Going deeper, what are the different Harajuku styles, and where did they come from? Also, how did Harajuku become so popular? We'll tackle all these topics, and more below.

What is Harajuku Fashion?

The term 'Harajuku' comes from a district in Japan that has the same name. Harajuku is a neighborhood that's very well known for its unique and oft-outrageous clothing and styles. Furthermore, it's very popular among the Japanese urban youth.

Harajuku isn't a singular style, but rather an amalgam of different ones in a single expression. Strictly speaking, Harajuku focuses more on freedom of expression and community.

If you dig into Harajuku fashion, you'll find many different subcultures, but all of them like to 'wear' the things they enjoy and find other like-minded individuals this way.

Some believe that Harajuku fashion to be an expression of rebellion against Japan's strict norms and societal rules, where youths dress up in apparently crazy, fun, and loud clothes. Others view the Harajuku style as a 'freedom of expression' regarding personal preferences. Regardless, it seems that Harajuku is here to stay for years to come.

The History of Harajuku Fashion

Harajuku is believed to date as far back as the 1980s and rose in height somewhere in the 2000s. At this point, there were many subcultures, with dozens of different looks and styles available for those who wanted to express themselves in clothes.

One particular magazine, FRUiTS, managed to capture many different Harajuku styles and put them on paper. The publication mainly focused on this Japanese subculture and photographed them for showing in their magazines. The magazine even added helpful and interesting details, such as the person's occupation, age, and the inspiration for their look.

Although the magazine side of FRUiTS has ended, its creator, Shoichi Aoki, continues to post Harajuku fashion photos on Instagram.

Why Harajuku Style Is So Popular?

Perhaps the reason why Harajuku is so popular is that it encompasses many different and unique subcultures in the Japanese scene.

Harajuku is mainly defined as a style where you're free to dress your way, and it breaks the boundaries and fashion norms to an extent. This kind of street fashion can lead to other popular styles, including Ko-gyaru, Lolita, and goth, among others.

There's been some debate on what really constitutes Harajuku style, and if there are common elements that can be identified, so a look is classified as Harajuku. It seems that dressing up in bright, loud colors and symbols captured from foreign and domestic styles captures the essence of Harajuku. Also, it's worthy to note that in Japan, most of the fashion trends are dominated by women. 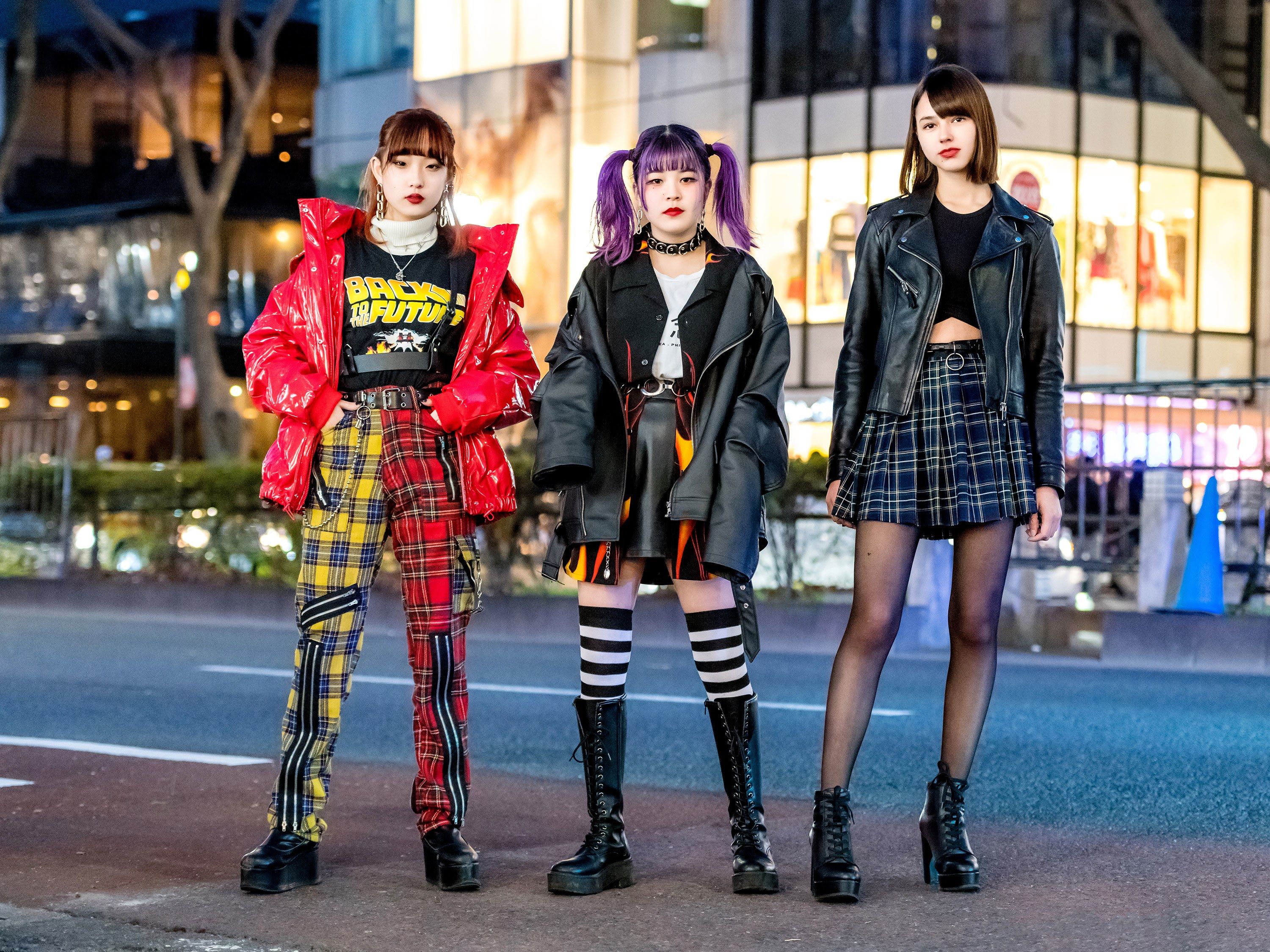 In this regard, Harajuku-style is not about the mainstream, but rather, identifying people from the mainstream. The zero guideline rule and total freedom of expression are immense, and the only thing you'll need to achieve a Harajuku look is to express yourself.

Harajuku fashion also breaks a societal norm where professionals and brands dictate how people should look. Japanese youths somehow turned it around and chose the pieces they wanted, and created something out of it.

Harajuku presents its own unique style and subcultures, but it's roughly divided into categories such as Lolita, Ko-gyaru, Kimono Style, Decora, Goth, Punk rock, and Visual kei.

Let's take a look at what elements constitute each style and their definition.

The term 'Lolita' in Harajuku isn't a reference to the infamous movie or book, but rather from Japanese dolls. Simply speaking, Lolita fashion is made so that people can dress up as living dolls in real life.

Aesthetically, Lolita borrows from the Rococo period and Victorian-style clothing. The niche began and grew in the 1960s, particularly in the Osaka period. In the 90s, the subculture grew to the degree that it pervaded Japan and, eventually, the world.

Lolita Harajuku style is easy to spot- people usually opt for bright and loud colors in their clothes, and often wear bonnets, bows at top wigs, and whatnot.

Lolita comes in several sub-categories, namely Sweet Lolita, Classical Lolita, and Gothic Lolita. Gothic plays with mostly dark and sultry colors, while classical is more contemporary. Besides, Sweet Lolita works with pastel colors like yellow, blue, and pink with a focus on fruits or baby animals. 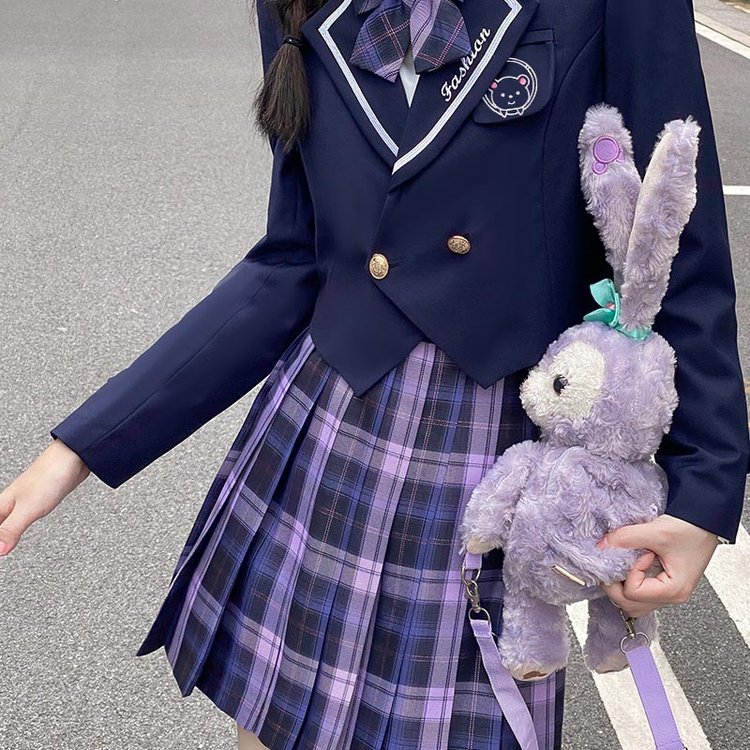 It became very popular in the 90s in Japan. Young girls adopted the high school outfit, with leg warmers or loose socks and leather shoes, miniskirts, and a shirt or sweater. They also dye their hair and tend to adopt a tanned appearance.

The style still lives up to this day. The word 'gyaru' directly translates to 'girl', which they call themselves.

Kimonos are typically reserved for more special occasions and are rarely worn as everyday clothing. Harajuku fashion turned that culture around on its ear, with youths getting out their kimonos and enjoying the benefits that come with wearing them. 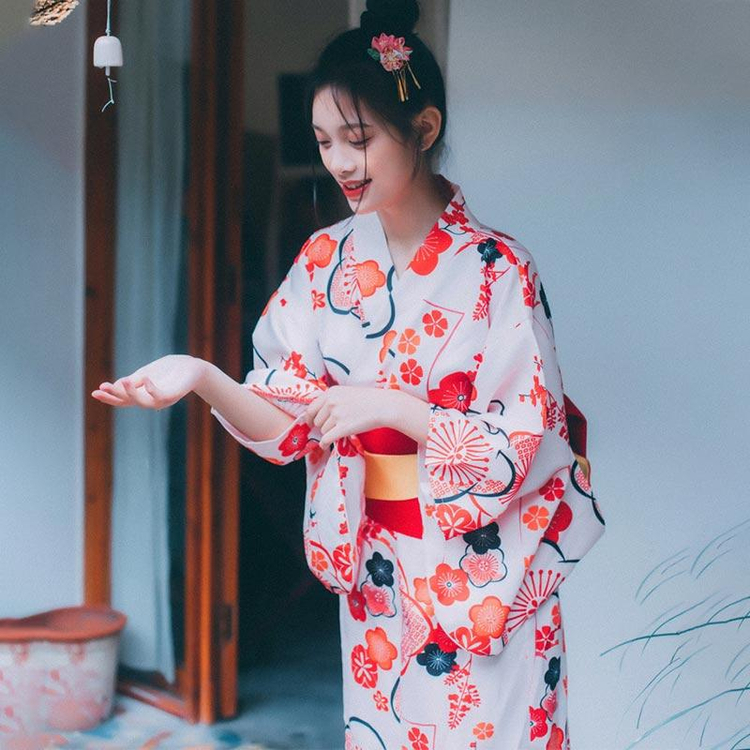 Often called 'street kimono style', the difference between it and traditional kimonos is the splash of colors and modern patterns. It's popular with both men and women Japanese teens, with shops catering particularly to them online. Adapted kimonos usually sport an 'Oni' pattern, which is synonymous with the country's folklore monster.

Decora is short for 'decoration' and is often associated with cutesy clothing, or 'kawaii' in Japanese words. 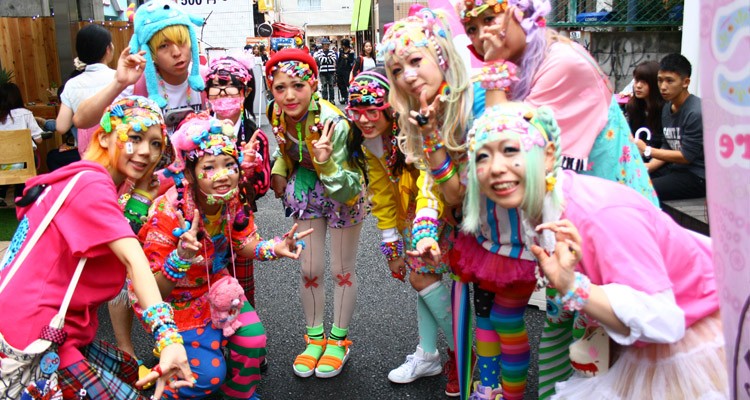 The style incorporates 'kawaii' elements such as Hello Kitty and throws in plenty of accessories into the mix. In fact, it would seem that accessories are the main focus of decora, with the wearer having dozens of necklaces, clips, bags, or bracelets at any one time.

Gothic Harajuku is pretty similar to the ones presented all over the globe. Here, the wearer often prefers black and dark colors to create a somber atmosphere. 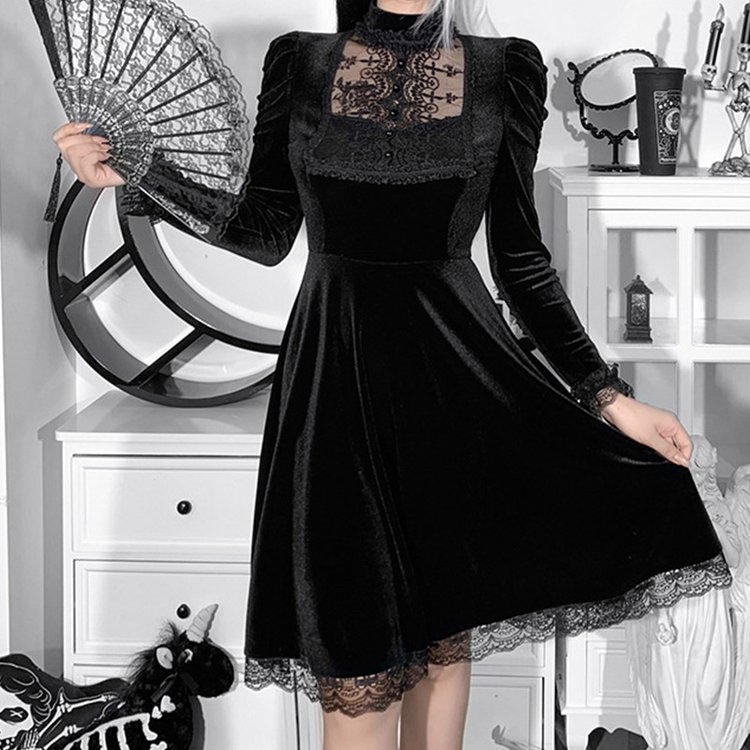 Goth can also cross over to subcultures such as Lolita or steampunk as long as the color theme stays the same.

Punk fashion has been around for decades, and in Japan, they've adopted the style and added their own flair.

Punk rock is related to punk rock music, which became a popular music genre during the 1970s in New York and London. It's similar to goth in that black is the preferred color; however, there are unique fashion elements, such as studs, chains, leather jackets, dark makeup, and black hair. 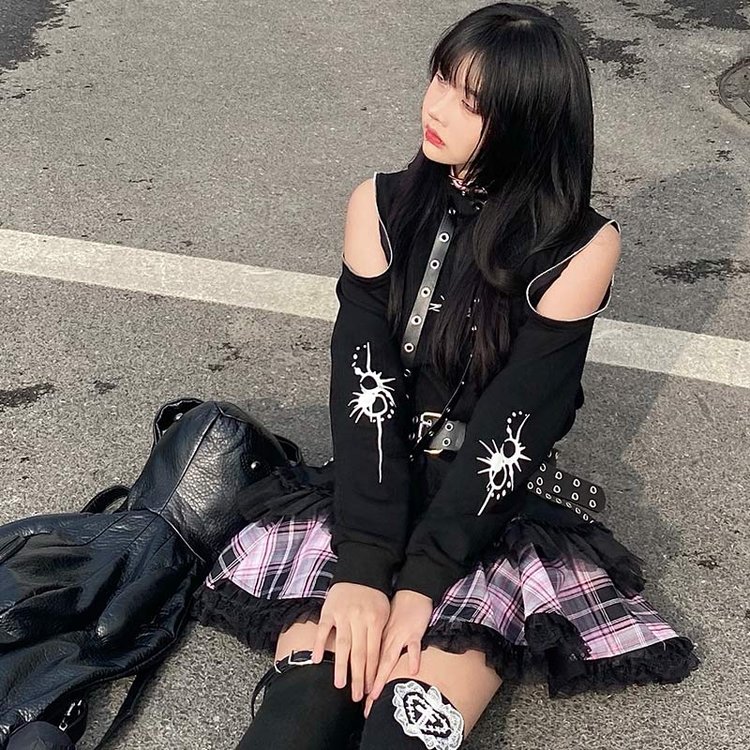 An off-shoot to punk rock is cute-punk, where the punk elements mingle with 'Kawaii' designs, such as dresses, skirts, and ribbons. That may seem like extreme opposites, but it somehow seems to work.

Visual kei originated with bands that formed around the 1990 and 2000s era. For these bands, dressing up is just as important, if not more than the song or lyrics. 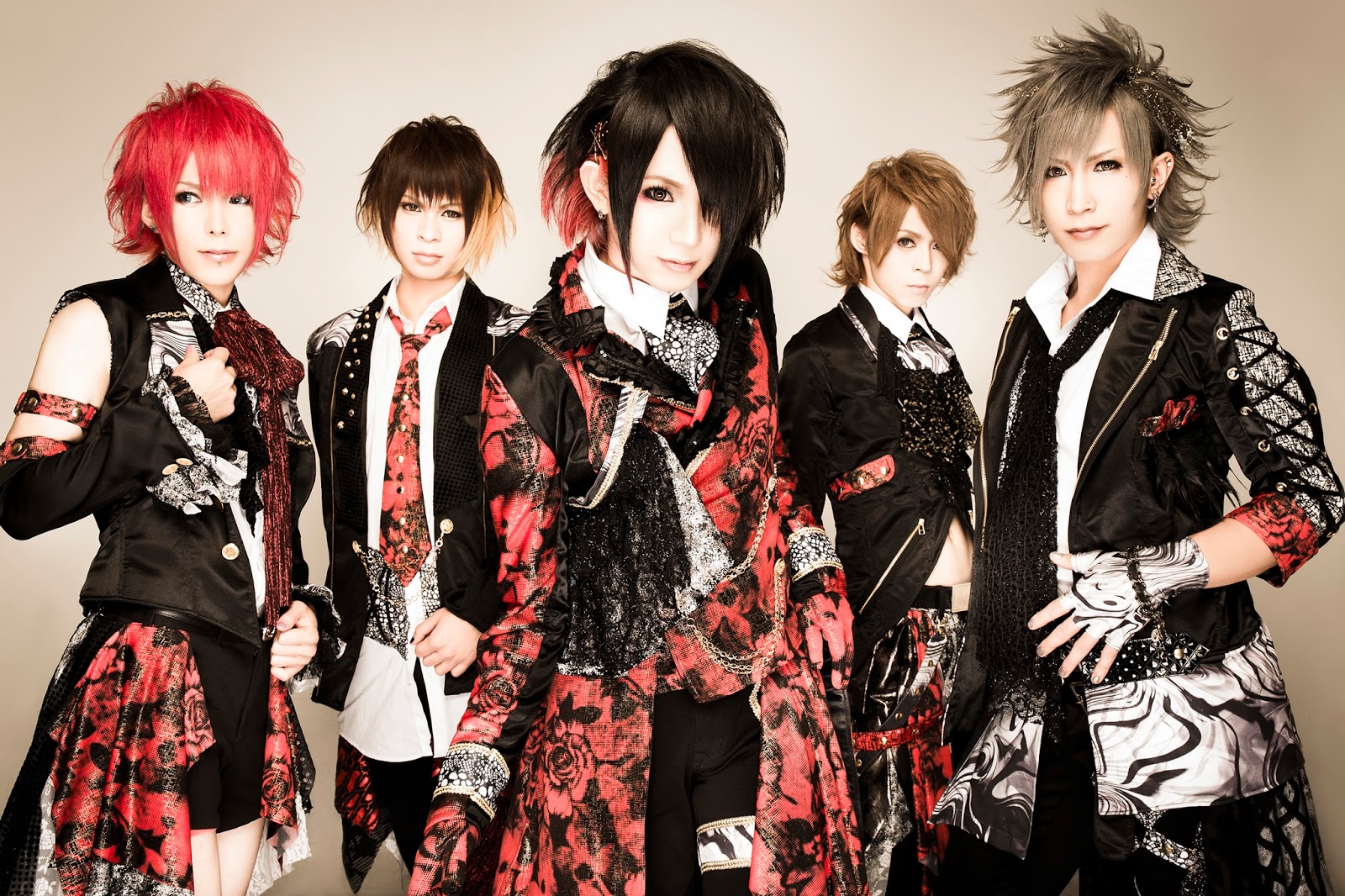 As per the name, Visual kei is all about looks and aesthetics, particularly the costumes, hairstyle, and make-up. It might be likened to the glam rock scene in the West, but with their own unique additions.

Visual kei boomed in the 90s and tapered off in the 2000s. This particular brand of fashion attracted boys more than girls, as some of the most popular public figures included Japanese bands such as Versailles, L'Arc-en-Ciel, and X Japan.

How to Dress Like The Harajuku Style? (6 Easy Steps)

Impressed enough that you want to dress up in Harajuku fashion? You're not alone. People around the globe have their interest piqued by attractive and bright clothing styles online, and Harajuku is no exception.

Here are 6 easy steps on how you can adopt the Harajuku style that you want.

The best thing about adopting Harajuku styles is that you can find your own. You can mix and match different elements together and create a whole look. At the same time, you have the freedom to express yourself through what you're wearing. 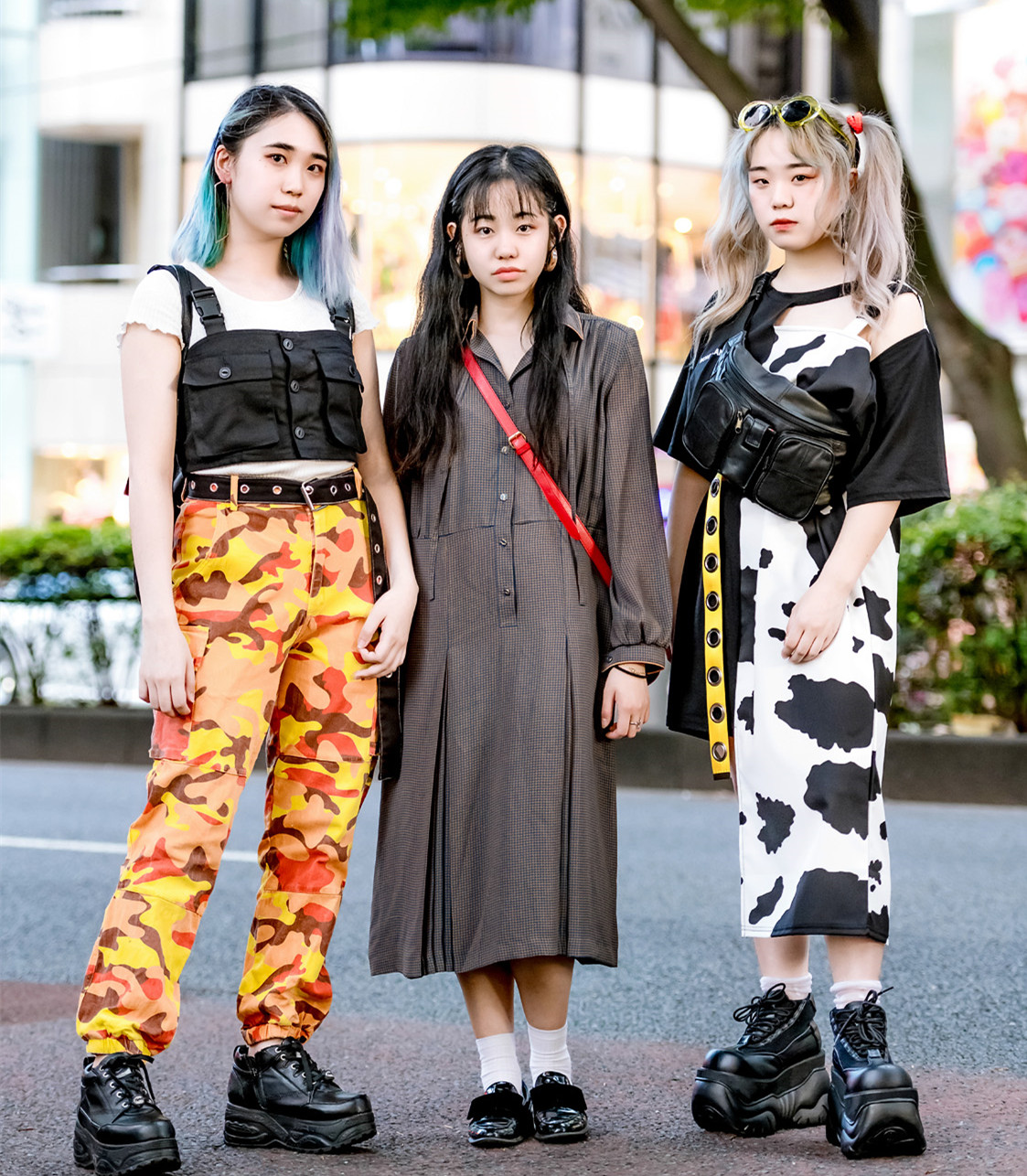 You can start by emulating your favorite persona or character from mediums such as comics, anime, games, or films. You can also choose from styles, such as Goth, Punk rock, or Decora, and go from there.

It's worthy to note that with Harajuku, you're not really bound to follow a design. Also, don't be disappointed and give up if you don't like the outfit- you're bound to find something good as you go through the clothes and accessory selection process.

Harajuku fashion is more or less layering clothes to achieve the look you want. The brighter or more eye-catching the color and design, the better.

For starters, you can layer dresses with leggings, or sweaters with jackets and tank tops, and shirts. Ruffled dresses are welcome too, especially if you're aiming for a Lolita look. It may take some time to see the effect you want as you go through your wardrobe, but patience is the key.

3. Mix with Patterns and Styles

Traditional fashion dictates that only certain patterns go well together, but this isn't the case with Harajuku. You're actually encouraged to be more creative and ask questions like- 'what if I mix styles and patterns?'

Harajuku is wearing what looks good for you. Therefore, you have the freedom to mix the style and pattern that seem well based on your preferences. Polka dots can be paired with stripes, and that same outfit can have several shades of pink or orange, for example.

Accessories in a Harajuku outfit are not just an afterthought- they're the main element and serve to cement the look you want.

You'll want to pick the boldest and biggest accessories you have, such as a purse, hat, or necklace, and try them on. Also, it's recommended that you have such an accessory adorning everything from head to toe. The color and design don't have to match as long as you like the effect it brings.

In Harajuku fashion, every inch of clothing should have something, either an accessory, clip, button, or whatnot. Also, your hair should be done the way you want- don't just leave them out of the picture. 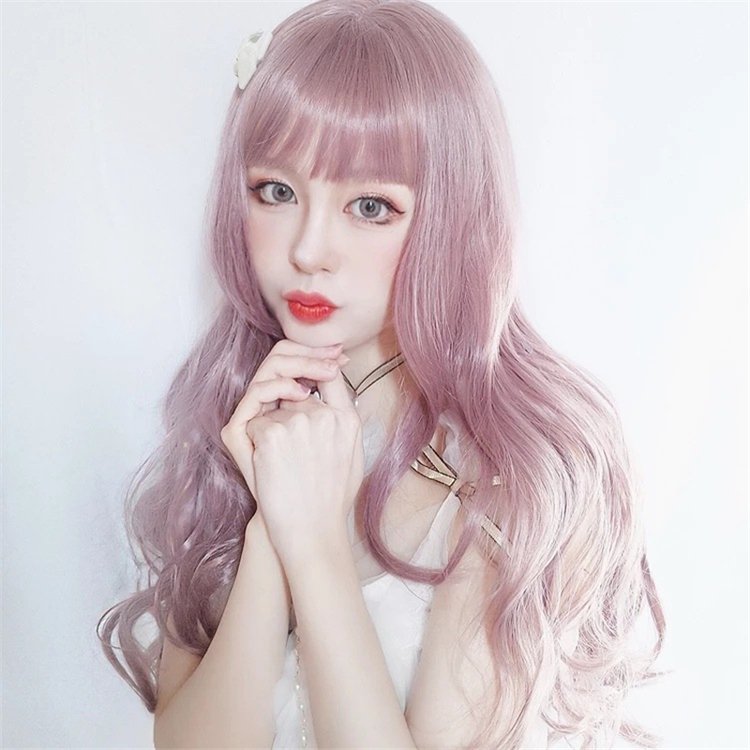 You can opt for a wig or color your hair in different colors. When it comes to hairstyle, the more creative and extraordinary, the better. You can try bangs, pigtails, or add hair extensions to emulate the style you're looking for.

Lastly, you'll want your makeup to appear very striking and accentuate the color of your clothes and accessories. There's no standard for putting on lipstick or mascara- just style as you go, but put them on thick and heavy, so the colors are bright and not muted. 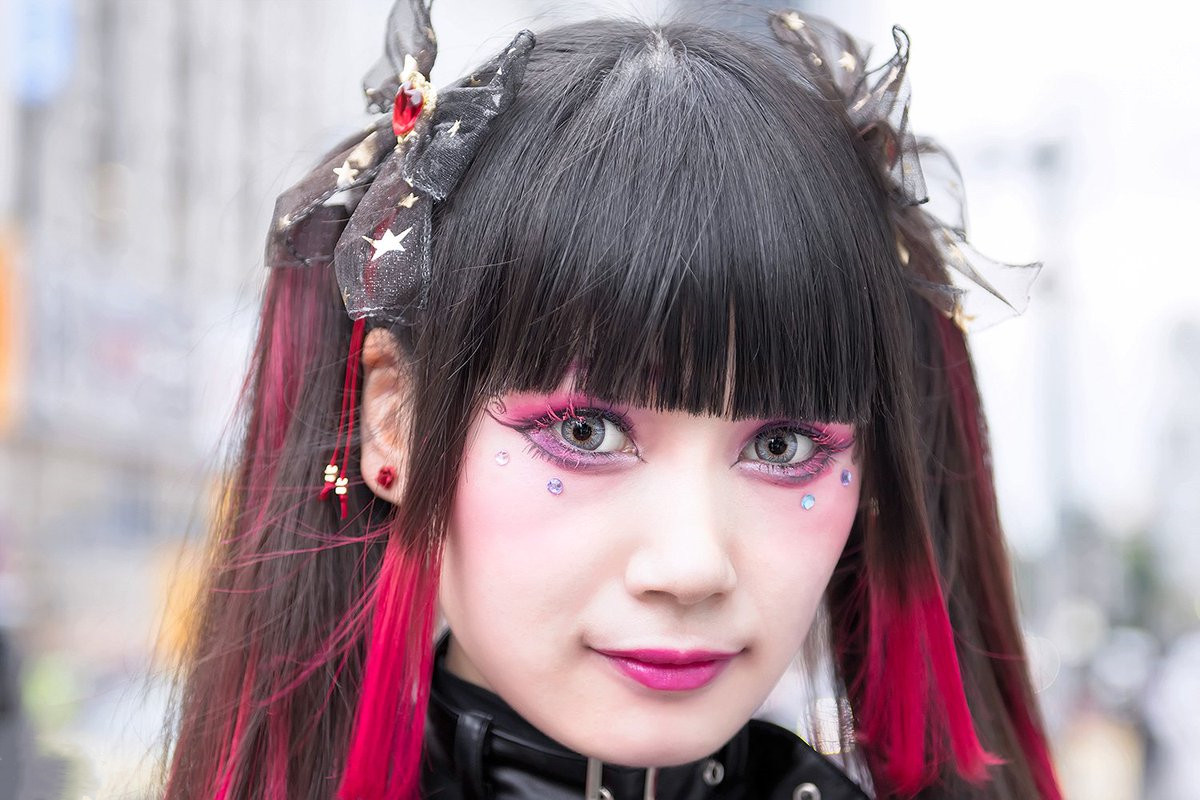 Be Confident With Your Harajuku Style

Harajuku, in essence, is all about freedom of expression, which means there's no right or wrong clothes or accessories. You can mix it up and throw all you have in one bright and colorful outfit, or you can aim for a goth theme or kimono style. 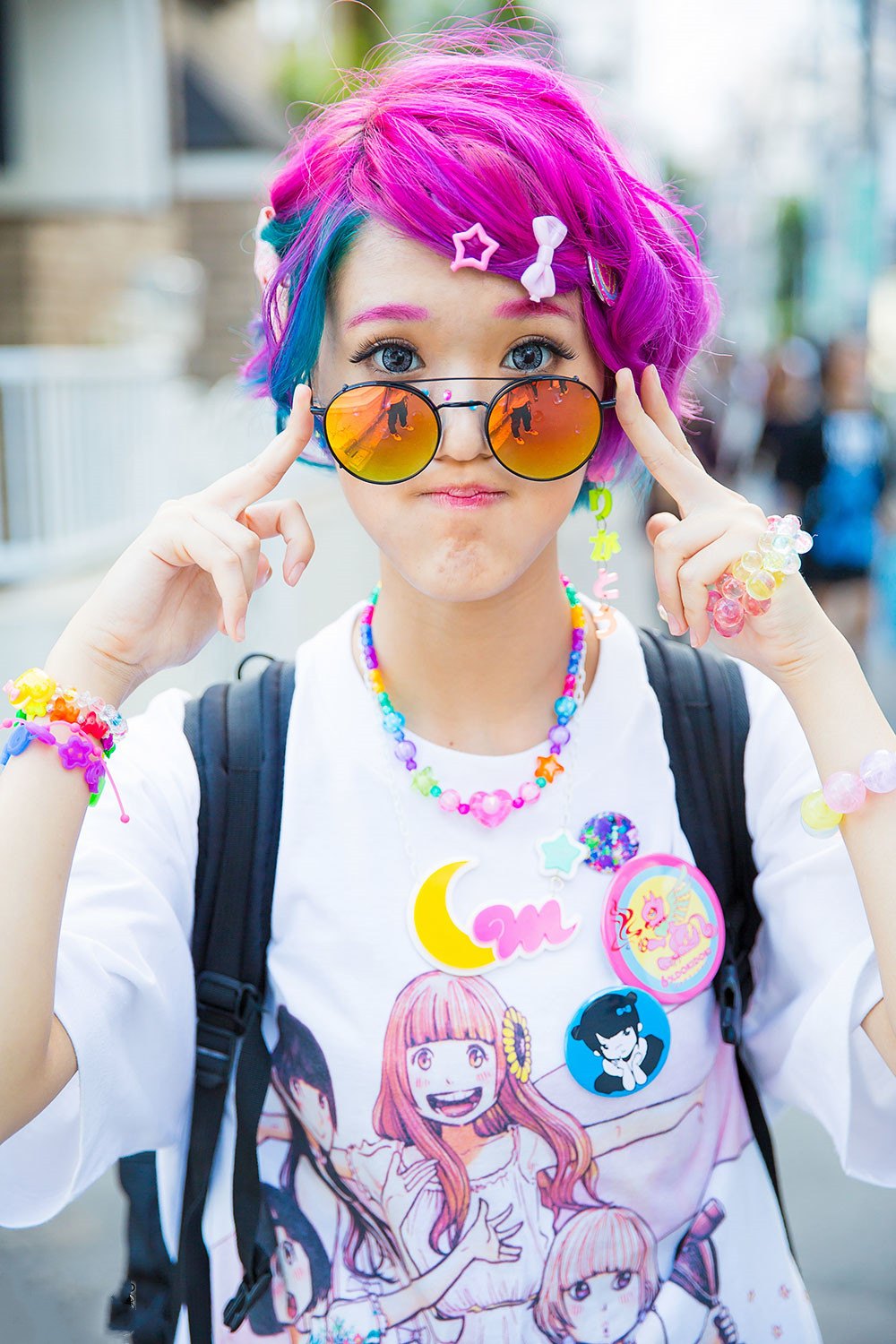 What's important is that you wear what you want with the utmost confidence. Sure, you'll get the occasional strange look, but it's what fashion is all about. Carry a smile, walk with confidence, and soon you'll be more comfortable the next time you decide to go Harajuku.

Harajuku fashion is still alive and well, and will continue to thrive as long as people want to show off their true selves in their chosen clothing and accessory. The district of Harajuku is home to shops that cater to those who want to dress up, with everything from designer shoes to quirky accessories in each establishment.

What Is The Difference Between Harajuku and Kawaii?

Kawaii is all about exuding a cute and charming outfit, which in itself is part of the Harajuku culture. Harajuku can be dark and serious, such as goth and punk rock, or whimsical, such as Kawaii fashion, Lolita, or Decora theme.

Harajuku fashion is, in a sense, all about exploring what you want and incorporating all those elements together. Be as colorful as you'd like and rock the outfit with utmost confidence to achieve that Harajuku style.