Before we get into the details of Japanese Kogal, we thought it would be fitting and fun to share a little history about how this look began.

Kogal (meaning “young” “Gal”) is a more conservative sub-set of Gyaru fashion that revolves entirely around the school uniform look. This style is extremely popular among young ages.

The term "Kogal" is believed to be derived from the combination of the Japanese word for "high school" -- koto gakko, and the English word "gal" which means girl. Gyaru (or “Gal”) fashion began in Japan in the late 1980s and early 1990s and is believed to have been inspired by American television shows that took place in affluent and sun-soaked Californian areas such as Malibu and the San Fernando Valley.

Young women in Japan began to rebel against Japanese social constructs and emulate the girls on the screen by tanning their skin darker, dyeing their hair lighter, wearing shorter skirts, heavier makeup, and louder fashions.

Kogal became both a fashion trend and a cultural movement for Japanese youth.

What is Kogal Fashion: More Than a Uniform

Japanese students have had a long and colorful history with their school uniforms (which you can read more about down below). Because of that, the school uniform has become one of the most well-known fashion features, as known as Japanese kogal fashion. There are stores completely devoted to selling these kogal uniforms, because students love to wear them in and out of school, even if their school doesn’t require uniforms as part of its dress code.

In fact, even women who are beyond school age still enjoying wearing these cute ensembles.

They have a simple sophistication and are flattering on most body types.

How to Make a Kogal Look of Your Own

Creating a Kogal look of your own is relatively simple and positively fun!

Here are the basic components:

If you’re going for more of a true Gyaru look, you’ll want bigger, fuller, blonder hair, but the Kogal look is a little more simple.

Kogal hair is usually dyed lighter than black, ranging from light brown, red, and blonde. You can easily wear a wig like this to enjoy the style: Hair length for the Kogal look is most often long, but could be cut short, and is worn wavy, curly, or straight.

You could wear your hair down, or style it up with some medium-low pigtails, a ponytail, or a half-bun.

Whatever style and color you choose, your hair should look cute and kawaii, but also a little sexy.

Similar to our note on hairstyles, if you’re going for full Kogal, make sure you’ve been to the tanning salon and have applied a lot of bronzers.

Kogal makeup could include using bronzer, but it is markedly less important than it is for the classic Gyaru look.

Other than that, pay a bit attention to your eye makeup and highlight your eyes with thinner eyebrows, fake lashes, mascara, and eyeliner for a bigger and bolder look.

The tops are all about layers in Kogal, and you can wear more or fewer layers depending on the season.

Start with a white or pastel, collared blouse or T-shirt (short or long sleeve) and a scarf, tie or ribbon tied loosely around your neck. Next, you can add a vest (either knit, or a more structured fabric), a blazer (extra points if it has a school crest), and/or an oversized sweater.

If you get too hot, you can tie your sweater around your waist and still be on-trend. Another cute option for tops would be the sailor uniform (or “sailor fuku”).

It is easily recognizable by its blouse which features a wide collar that extends into a rectangular piece of fabric that cascades over shoulders and upper back.

The collar is typically accompanied by a sash-style tie or a bow at the chest. Often there is a bit of striping on the collar and the end of the shirt sleeves, and the collar and skirt are the same color. What do you think of when you hear "school girl skirt"? The Kogal fashion is to wear skirts that are pleated, plaid, tartan, or a solid (usually jewel-toned) color, and they’re worn short.

If you’re wearing a big sweater, it should cover the majority of your skirt. Some other skirt options would include wearing a Suspender Skirt or a Jumper Skirt.

The Suspender Skirt Uniform is what you might expect- there are two suspenders connected to a pleated school girl skirt of the same color, with a white blouse underneath and a tie at the neck. There are a few variations on the Jumper Skirt uniform.

In its most basic form, it is an American jumper style dress- pleated and plaid, or a solid color- worn over a white collared blouse with either short or long sleeves. And of course, it features a ribbon or tie at the collar.

There are variations of this style depending on how much fabric is on the torso portion of the dress.

Some feature full coverage with a large square of fabric, attached to two somewhat narrow, tank-top-style sleeves over the shoulders. Others feature more of a vest or an extra-wide suspender look.

The keyword for Kogal legwear is socks! 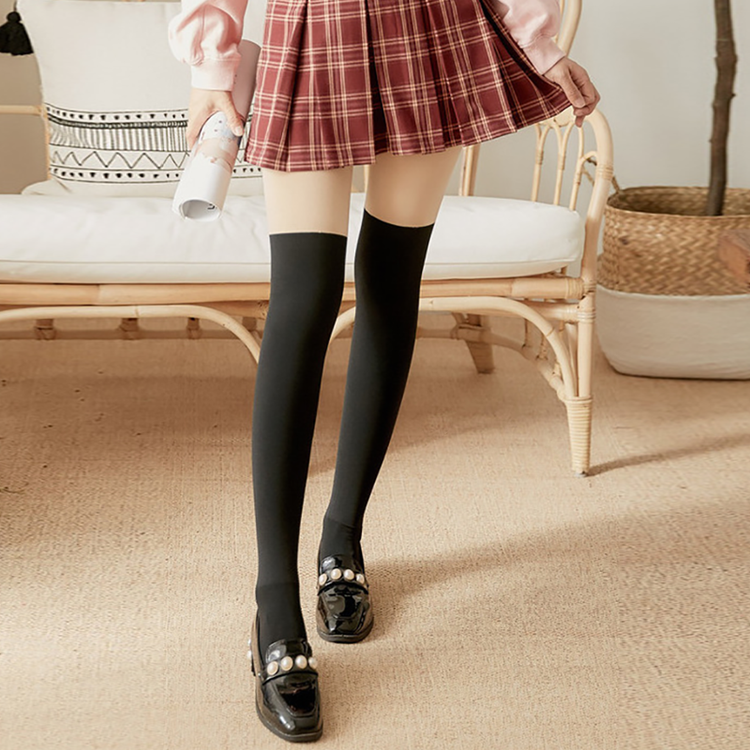 Try to aim for solid colors, such as white, black, or navy (depending on the colors in the rest of your outfit). You could wear these ensembles with tights as well, but they’re really more commonly worn with tall or loose socks on bare legs.

The combination of the tall sock and short skirt will have an impressive lengthening effect on legs.

The most traditional shoe choice would be Japanese schoolgirl shoes, such as loafers with a low, wide, chunky heel.

These usually come in brown or black. You could also wear platform shoes, boots, or sporty sneakers if you want to add a little color. Pumps are not usually worn, as they are not practical for a school uniform.

But if you want to try it with pumps, go for it!

The main accessory for Kogal fashion is definitely the cute bag.

These could take the form of fashion backpacks, shoulder totes, or small novelty purses in cute or dainty shapes and colors. These are often decorated with keychains or charms. Another important bag accessory is an actual school bag.

These tend to look like a cross between a briefcase and a duffle bag and could be made out of nylon or leather, and they come in a wide variety of colors.

Japanese high school uniforms have seen a lot of change over the years. They started as very traditional Japanese garb (such as kimonos), but as Japan became more westernized in the late 1800s, so did their fashions and their attitudes.

Around the 1960s and 1970s, many Japanese students were no longer willing to conform and wear what their school told them to wear and they rebelled by making their uniforms into vehicles for their own self-expression instead.

Eventually, Japanese schools chose to either make their uniforms more appealing, or abolish them altogether.

It is a fashion trend that has continued since the rise of Gyaru in the late 1980s/early 1990s until today in Japan as well as other countries around the globe.

The sailor uniform (or “sailor fuku”) is easily recognizable by its blouse which features a wide collar that extends into a rectangular piece of fabric that cascades over shoulders and upper back.

The collar is typically accompanied by a sash-style tie or a bow at the chest. This look was inspired by the naval uniforms of European nations as well as children’s fashions in America at the time.

The sailor uniform is heated in the schoolgirl fashion trend.

The Gakuran style uniform has been in place for boys since the late 1800s.

This is the only uniform style on this list that is primarily designed for male students. While you can find female versions of these for sale online, they are definitely less common than the other styles we’re looking at. They have the traditional look of a western military cadet, with a tailored jacket, a line of round, metallic buttons, and a mid-height, stiff collar.

The tailored jacket and pants are generally black but may come in navy blue, and a white collared shirt is worn underneath. 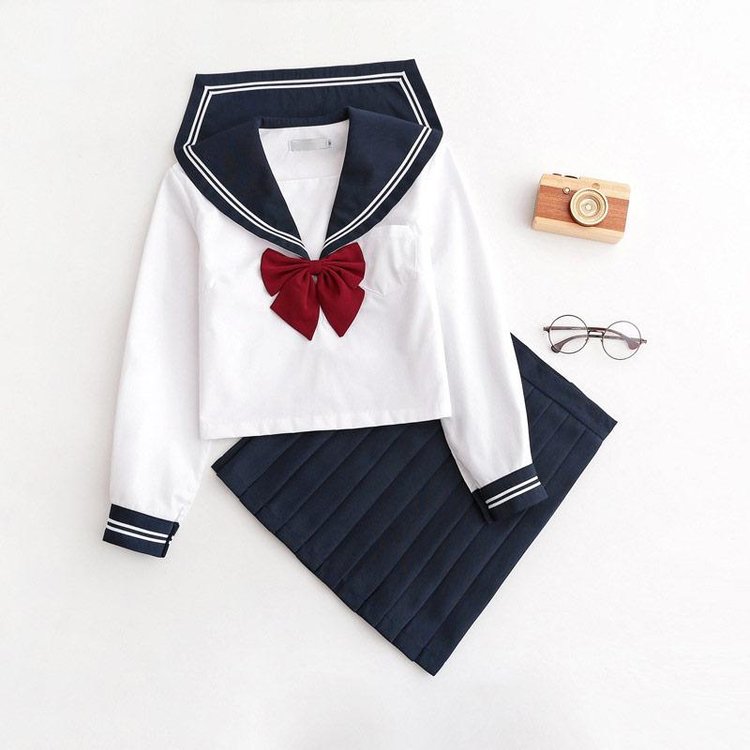 This is the most current style of Japanese high school uniform, and it is arguably the most popular uniform in Kogal style.

Depending on the season, it is worn with a pleated school girl skirt, blouse, tie and vest, sweater and/or blazer. 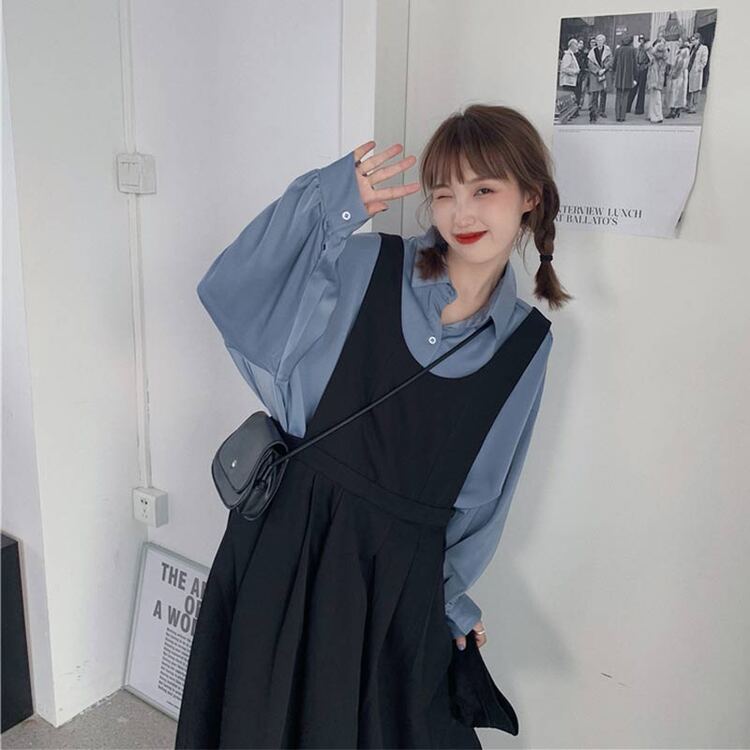 The Suspender Skirt Uniform is what you might expect: there are two suspenders connected to a pleated skirt of the same color, with a white blouse underneath and a tie at the neck.

Boys and girls can wear this type of uniform in elementary school (though the boys wear it with shorts, rather than a skirt).

As students get older it is less likely to be seen as a true school uniform, but it is still a popular style of nanchatte seifuku (fake uniform).

(Psst! For this article we mean the American definition of a jumper, rather than British.)

There are a few variations on the Jumper Skirt uniform.

In its most basic form, it is a jumper style dress - pleated and plaid, or a solid color - worn over a white collared blouse with either short or long sleeves. And of course, it features a ribbon or tie at the collar. The variations of this style depend on how much fabric is on the torso portion of the dress.

Some feature full coverage with a large square of fabric, attached to two somewhat narrow, tank-top-style sleeves over the shoulders.

Others feature more of a vest or an extra-wide suspender look.

Jumper Skirt uniform is an older style of Japanese school uniform and is probably the least common for creating a Kogal look, but it's still worth considering!

Are you ready to try Kogal? If you follow these tips, you’re sure to earn an A+ in style.

Experiment with a few and see what you like best! Subscribe today to hear first about our sales
Thanks for subscribing
Main menu
Company
Help Center
Get in touch
+852 6585 2832 Email us
Follow us
We accept
Copyright © 2021 MODAKAWA.com All Rights Reserved.
ONLY OFFICIAL WEBSITE